Today was so comfortable, almost cold, that even after a morning run, I still needed to be outside. My afternoon walk took me to Green-Wood Cemetery where I watched comical parrots, brazen mockingbirds, and fidgety frogs. Summer is a bit of a lull until migrations pick up again, but I was still happy with what I saw and satisfied that this is my backyard. 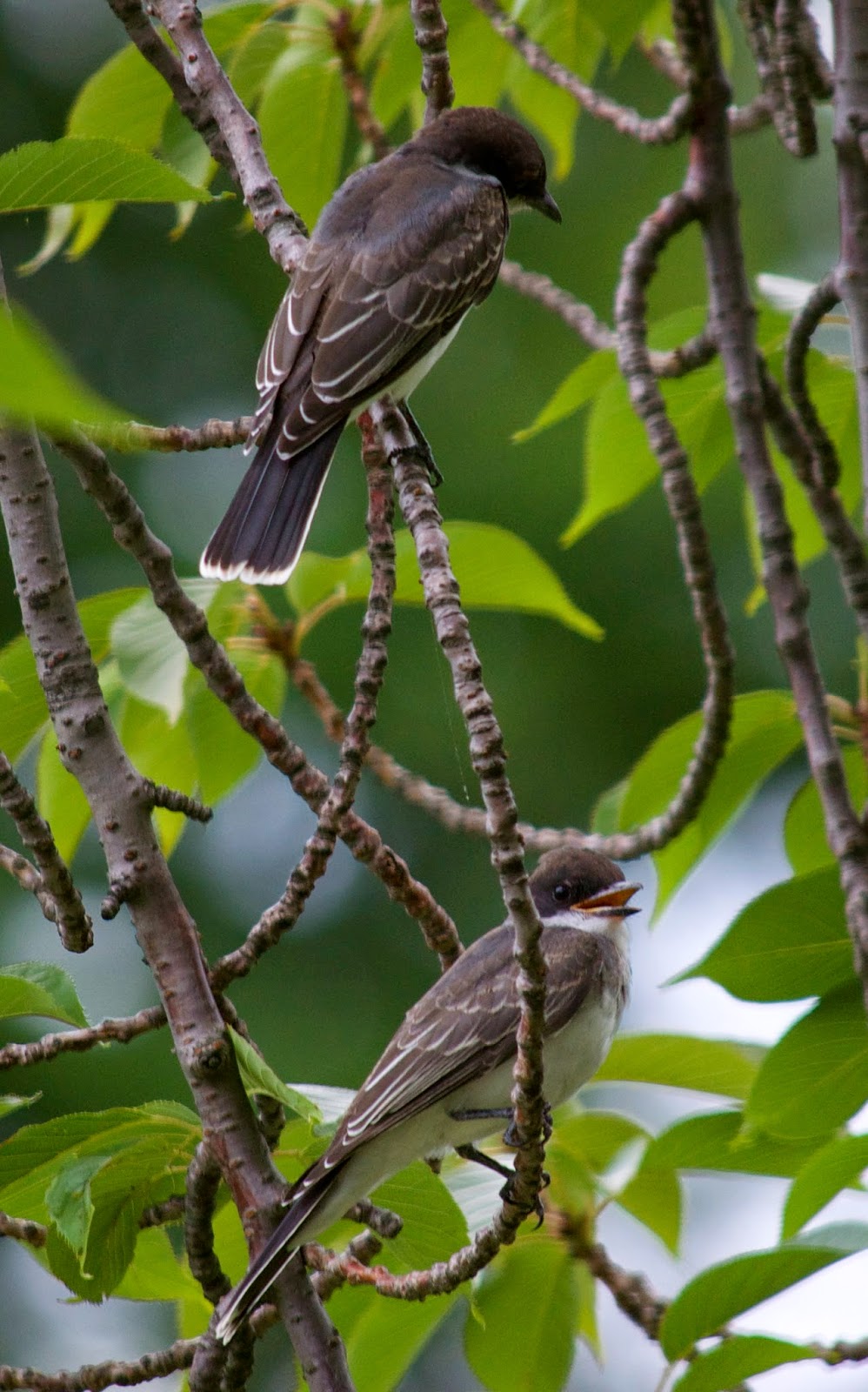 Posted by Jen Kepler at 8:12 PM No comments:

Visiting Dead Horse Bay, in Brooklyn, NY was a first for me. And I'm kind of glad I didn't read about its history until after because it gave me the chance to try and answer the questions I came up with myself while on my 2.4 mile walk.
My first question was why in the heck such a depressing name, Dead Horse Bay? I thought, well maybe it's the mosquitoes, there are enough here to suck a horse dry, and they hurt when they bite! I donated a lot of blood today.
Second question, why is there SO MUCH GLASS on the beach?! I linked it to my first question, maybe it's what killed the horses; it would get wedged in the softer parts of their hooves and cause them such pain, they'd die. When the waves met the beach, they'd literally sing, it made a chime like tingle of notes, from many glass fragments meeting others and making a soft series of "tings" with the waves. The sounds were almost relaxing as they were rhythmic with the waves.
Third question, how old is this glass? Some of this stuff looked old, like the old "kepler" medicine bottles we have on our shelves. I almost considered bringing some home, but I don't touch things I don't know about.
The answers to all my questions are answered when you see that the history of the area is varied and weird. In the 17th century Dutch settler had tidal mills here, one of the mill stones can supposedly be seen on one of the trails. Later, as time went on in the ninetieth and early twentieth centuries, this was a place for factories, dead horse carcasses were brought here to make glue, fertilizer and all that good stuff (that's where the dead horse part comes from! And apparently you can find horse bone fragments from time to time on the beach!). The place also became a landfill, it was later capped, but it has since burst and now you can find 100 year old garbage (leather shoe soles, old tires, ceramic, tiles) and TONS of glass all along the beach (second and third question answered - it also explains the two gentlemen scouring the beach for glassware). Later it was filled in with sand to make Floyd Bennett Field, a once functioning airport. The place even had ferry service to the Rockaways before the Gil Hodges bridge was built, as old wooden pilings are all that remain of piers out in the water.
It is a whacky beach, but I have heard so much about it from people who have come to it before for wildlife viewing and I was not let down! Learn more here!
As for bird sightings, my complete list can be viewed on eBird, but the abundance of butterflies was also a very welcome sight! 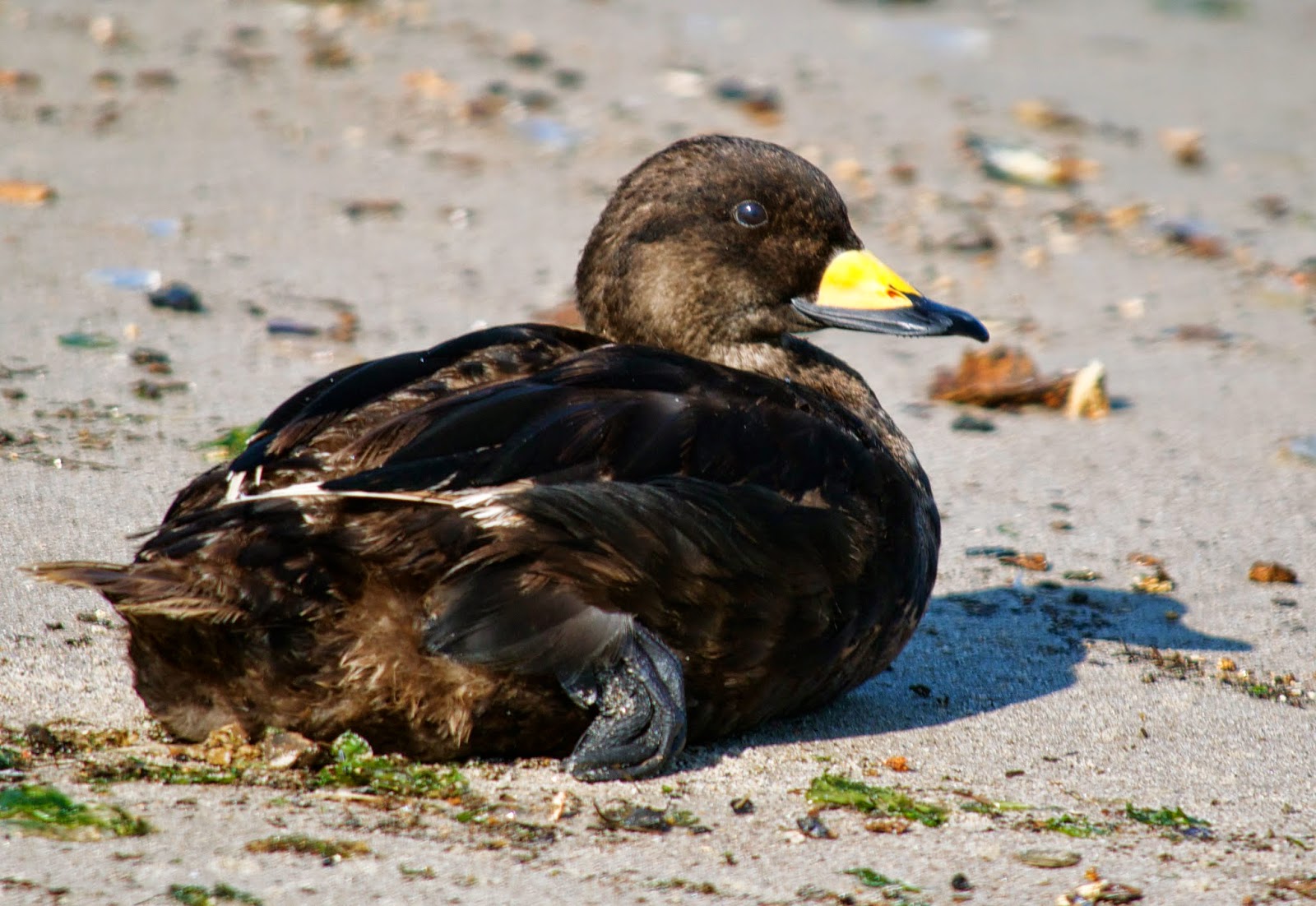 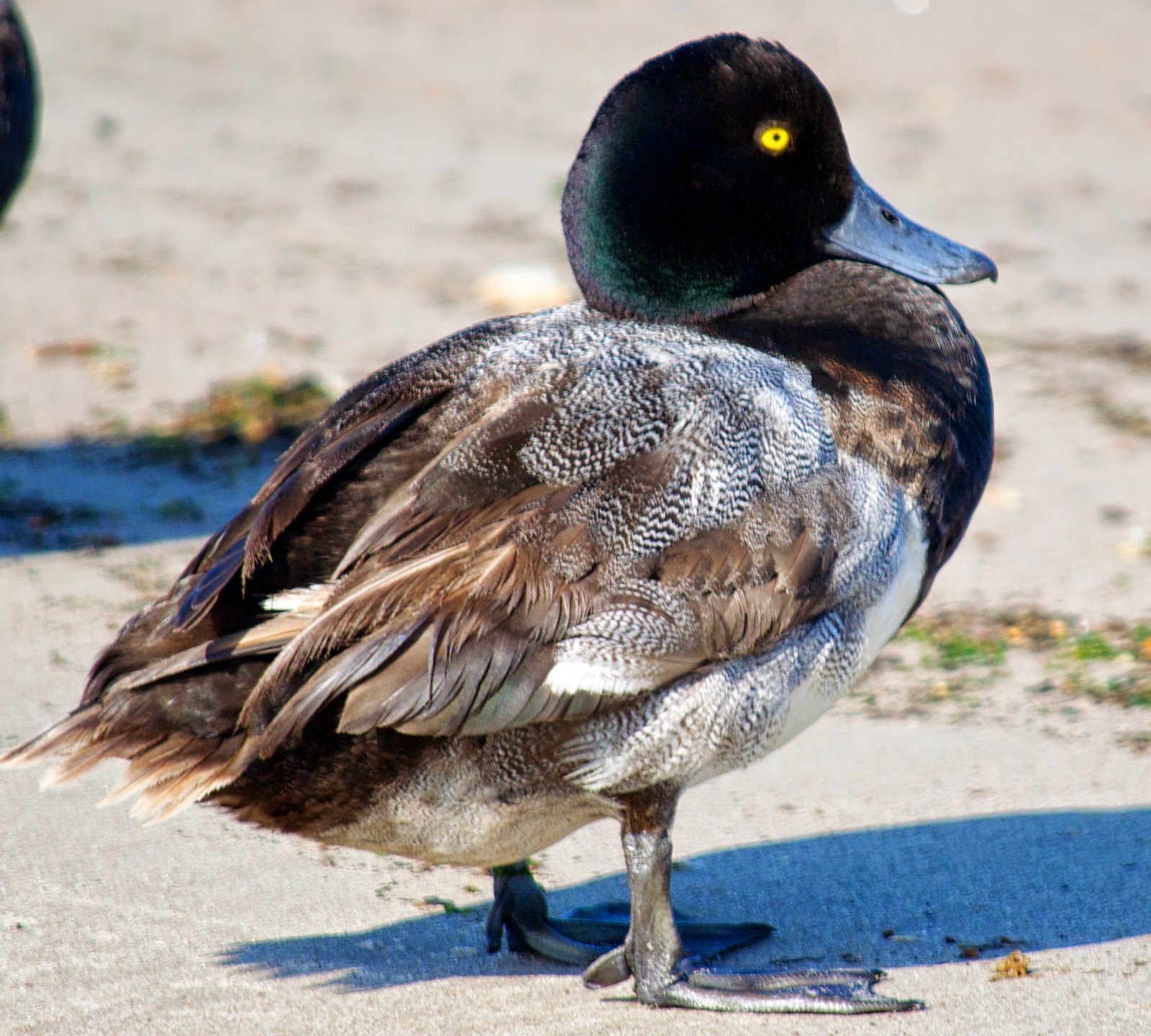 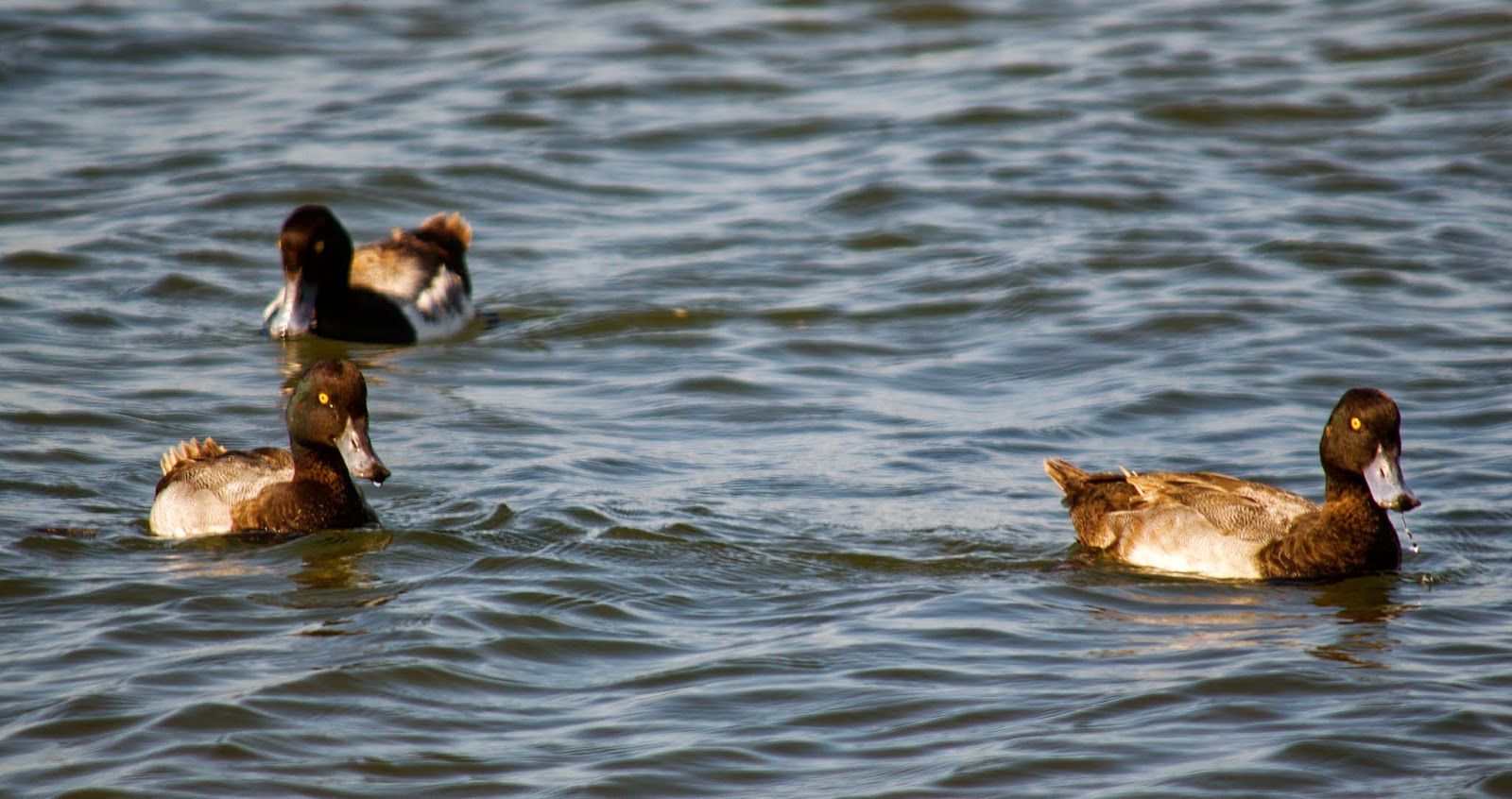 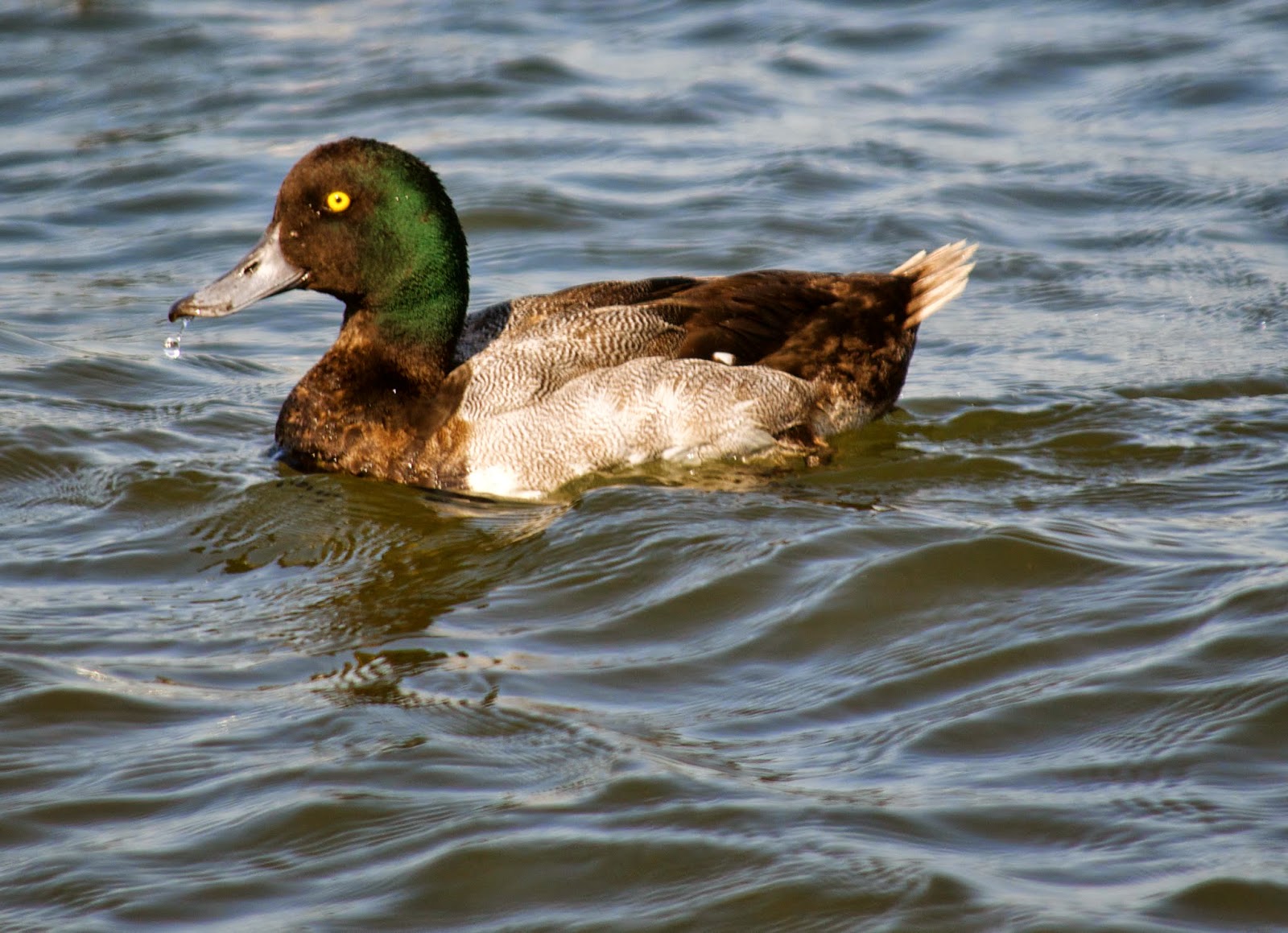 Posted by Jen Kepler at 4:38 PM No comments:

My day has been filled with psittacines (those are birds that are members of the parrot family...); I greeted the morning and ate breakfast with my Senegal Parrot, Gizmo, I hopped on my bike to care for a friend's beautiful parrot, then I went for a run and came back to a budgie hanging out in the tree in front of my house. Yup, there is a parakeet in the tree outside my home.
I have been hearing a parakeet, formally known as a budgerigar, outside for the last week now. I thought a neighbor had a bird cage close to their window and we were hearing him, although even our parrot isn't that loud. Then I realized the sound was traveling past our window, often, I had to confirm for myself that a budgie was flying about the block and today I did. These budgies are commonly kept as pets, they are inexpensive, easily obtained, but sometimes owners ignore their intelligence (don't let their size fool you, they are brainy!) and need for serious care. When people get frustrated or tired of their pet bird, sometimes it is thought that the best thing for the bird (and the humans who own it) to just "let it free." Sometimes these birds also simply just escape, open windows, lack of training, and unclipped wings can result in flying the coop.
These budgies originate from open grassland and scrub in Australia, New York, and Brooklyn at that, is no place for them. They are small and will not be able to survive winter, they need to compete with the natives, and can also fall prey to them, especially as I heard a kestrel outside today. Before considering any pet it is best to learn as much as possible before bringing that animal in your home so that the future is bright for both you and your pet. I have tried contacting and continue to contact people for help, in hopes that this little guy could have a safer place to live with plentiful food, water, and a space that is secure (no predators, hazards, or worries about weather).
Anyway, this guy is a character and cute to boot: 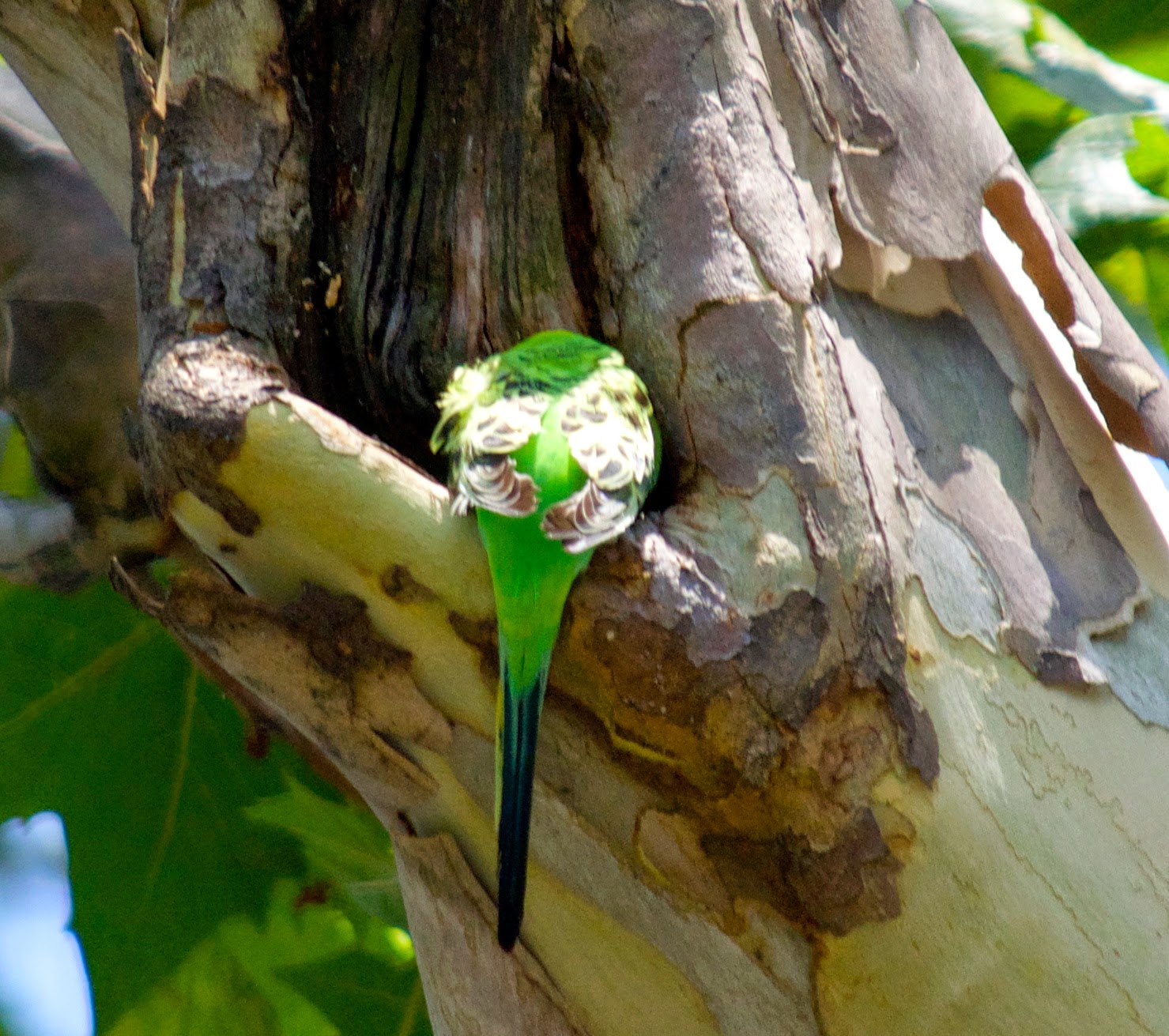 **Update - 7/24/14
I am incredibly sad to say that I found this girl on the street, presumably struck and killed by a car. I was so upset and I only wish I had been out earlier, in case she had been previously injured, I could have helped her and got her to the animal shelter. I had to remove her from the street, being right outside my home and having to constantly see car after car going over her.
This is a sad and awful reminder that "the wild" is no place for captive animals to roam free or grant freedom to, as they are no longer wanted. Whether urban or rural, the hazards are there, from cars, to predators. Also, sometimes these animals can become nuisance to wildlife native to the area, and can threaten species that actually do belong in the outside habitats. It is a sad and tragic end for this little girl and many other "freed" pets. Remember to do your research before bringing an animal into your home, and keep your current pets safe and secure. I would hate for anyone else to have to experience this!
Posted by Jen Kepler at 1:45 PM No comments:

I planned to get up early today and get out the door to get out and explore. At 7:10AM I hopped on my bike and made the 8 mile ride to Plumb Beach. The morning was pleasant, very comfortable out, so much so that sweating was minimal for 8 miles to my destination - Plumb Beach.

Plumb Beach is just past Sheepshead Bay in Brooklyn, across the way you can see Breezy Point, of the Rockaways. The beach can be accessed by car, there is a tiny parking lot, just off the Belt or by Bike, if you continue to the end of Emmons Avenue in Sheepshead Bay, there is a path across the street from the Comfort Inn.
It was low tide when I arrived, the waters here are in general, very shallow, making it a lovely place for waders and shore birds. It was empty, except for the 6 people I saw when I first began my walk. With proper footwear (or I guess none at all) you can walk through the wet flats that are exposed. Some people would even walk out to the sand bars, where they were digging up clams. The birds were active, many fishing and digging up their own clams. Many also rested right on the beach making viewing comfortable and easy.
After I finished, I pulled out my packed towel and laid out and watched birds continue their activity. More people arrived as noon came around, but the birds stuck around. The beach isn't too much of a swimming beach, I sat in the water for a little bit, but its shallow, so sitting is about all you can do.
Today's sightings included 23 species... I am going to try to be diligent about submitting my sightings to eBird, Cornell's Lab of Ornithology's database where birders can log their sightings and help contribute data. My sightings are listed here... and many are included in the photos below, enjoy!

Posted by Jen Kepler at 4:07 PM No comments: