I've been looking at birds when I can, my photo game has been weak, so here is a bunch of stuff I, sometimes we, have been seeing. Been birding solo, as a family, or just with the kiddo. Depending on the company I am with, or without really changes up the birding experience. So here is a little bit of everything...

Posted by Jen Kepler at 8:36 PM No comments:

So I decided that the following week I'd give myself a birthday re-do, and I did. I got up early yesterday to a cool morning, winds that would keep the bugs at bay, and perhaps move some migrant birds around. The humidity was non-existent. And the sun, there was sun! I headed to the East Pond at Jamaica Bay and was delivered a few of the things I had been hoping to see plus a few great surprises.

On my birthday I also got myself a Phone Skope and got to play around with it, it's pretty awesome. I love using it. I'd love to try it on a not windy day because the photos were just too shaky, but it took great video! So I'm looking forward to playing around with that more. If you have a scope, it was worth it, it might even replace my camera for shore birding.

Here is a video I pieced together with my new Phone Skope on my (fairly) new Vortex Viper Spotting Scope along with an iPhone 12Max Pro. Pretty pleased with the results, despite the wind! Following birds by scope is definitely tough!

Posted by Jen Kepler at 8:16 PM No comments:

The Story of A Wood Stork Wanderer 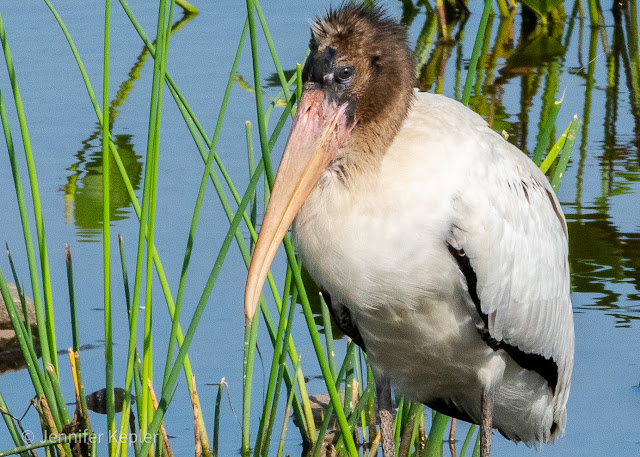 How exciting, birder Anthony C. of Staten Island reported a WOOD STORK on Staten Island. It's been a banner year for wood storks in New York State, a few of these birds have made their way up to NY, one earlier this spring in the Hamptons, another upstate, and then this one, a Verrazano Bridge Toll away, right before the Goethal's Bridge.

Wood storks are birds of Florida and the warmer climes - New York is quite out of their way, but this bird was a youngster, perhaps it didn't know. Of course I went to see it the following day it was reported and noted how cute it was for what many regard as a bird with a face only a mother could love. As adults, bare, brown, wrinkly skin is around their face and neck, but this one still had quite a fuzzy brown look to it meaning it was a juvenile bird. Who knows what drove it this way, perhaps following food, weather patterns, or perhaps we can all fantasize it as the young bird that dreamed about what was out in that wild blue yonder, big dreams for a big city.

So, off it went on it's flight from wherever it was born, and it ended up in Richmond Country, the fifth borough that folks beyond New York City can never remember or even realize is part of NYC. To most everyone, it's best known as Staten Island. And while most scoff it away as that borough you really never visit, except for maybe your extended Italian Family, it's actually our greenest borough and has some beautiful hidden treasures among it. It's the borough of parks, and this bird found The Global Matrix Park. Better known as the Amazon Fulfillment Center. 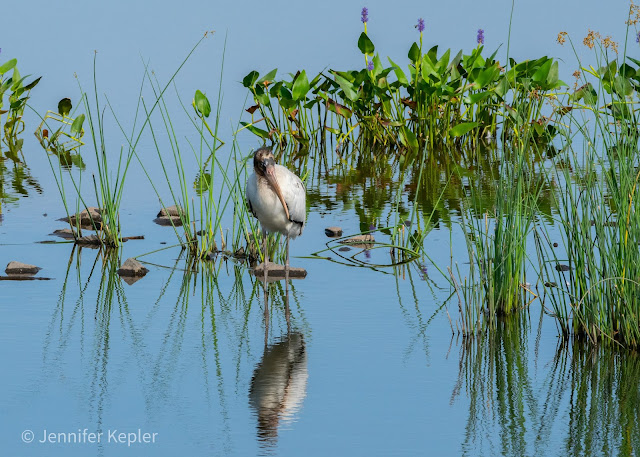 (This is where you insert a joke about Amazon delivering a stork... a bird paired up with the delivery of babies. Who ordered this bird?!)

You might question this bird on why the heck it would choose an Amazon Fulfillment center, but this bird is one that in Florida frequents drainage canals and storm runoff ditches. I saw my first one driving past a stork in such a ditch along the roadside in Florida. So, a small pond in a wetland butting up against a center full of trucks humming and idling nearby was probably feeling quite like home. It called this place home for about a week and a half.

Generally vagrant birds don't fare too well, they do, in most cases meet their demise. I thought about this in driving home from seeing this stork, this perverse way we go to see this bird whose journey here could essentially be a death sentence. But hey, I have a New York City wood stork! And that is generally what most folks think, in terms of listing; but also in fairness the documentation through community science platforms, this is most excellent data. 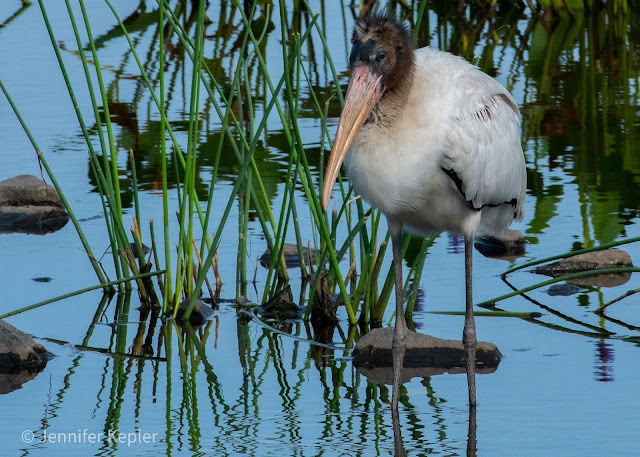 This is where this story takes a turn for the worse. Yesterday, reports on the NYS bird list serves went out, the stork was found dead. It's body was collected with proper permitting and its cause of death was to be looked at. What a sad tragic end for a young bird.

Today came the report of its very likely cause of death. A three foot long piece of foam was pulled from its gut. Looking similar to their natural prey of eels, snakes and fish, it ate it up. When animals consume plastic, trash, and other items that are not natural it generally leads to complications in their gut and ultimately death. Now, the birding community is shocked; how awful! We already are upset by unfriendly bird buildings, outdoor cats, oil spills, habitat degradation, and light pollution among so many other things, but we often are forgetful about our direct impact on the natural world. We live in a city where trash is just another part of the scenery many of us disregard it as a bag blows by our walking path; yet we are quite aware of the gyres of plastic in the ocean, but forget, easily, its everywhere and it causes trouble everywhere.

So here is my message, as an educator where it is my job, day in and day out to spread this message and include as many people from all different backgrounds and cultures as I can, as a community it is so important to focus on the bigger picture. This happens to birds and wildlife on the daily around the world. Of course when it happens to an animal that is quite unique and has garnered attention it seems so incredibly shocking, but the truth is it happens all the time.

If you want to make changes, make changes yourself where you can. The truth is we can't quit plastic, but there are many plastic things we can quit. Talk to your friends, your family, your neighbors, your local bird club, and your community leaders, put your support behind policies that help not only wildlife but us too. Buy used items instead of those freshly produced, plastic lasts forever and chances are you can find items in good condition instead of purchasing brand new (plus it saves $$). Reduce and refuse plastic as much as you can. Plastic recycling is a farce and most plastic that is dumped in that bin with the three cyclical arrows is either put into the landfills anyway or burned (a lot of countries where we'd ship our plastic for recycling no longer want our trash, because they are neck deep in it). It's cheaper to make new plastic and most plastic that is recycled is down cycled into a lower grade plastic like textiles that are a dead end for that petroleum based concoction.

So if the story of the wood stork has saddened you, I urge you to turn that sadness into empowerment and to do something, even if it's just quitting your Starbucks run and getting a new single use cup every day with just making some iced coffee at home (y'all, it's really easy). Or if it's something bigger, writing your officials or getting behind policies that can help wildlife and their homes. The truth is we need to start doing something as a whole, because the plastic problem is a big one and it's going to take more than just a few people who bring their own metal straws to the bar. 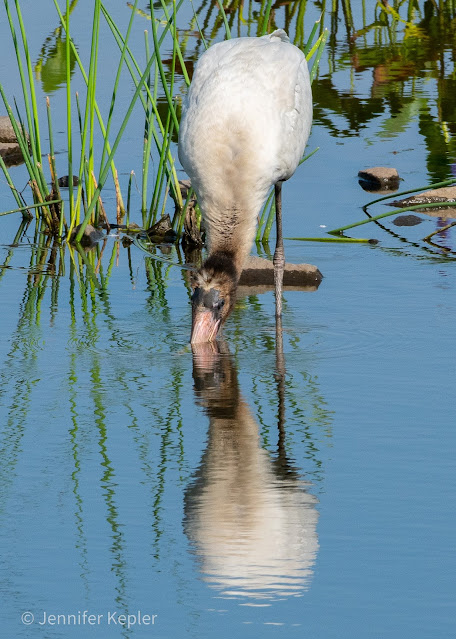 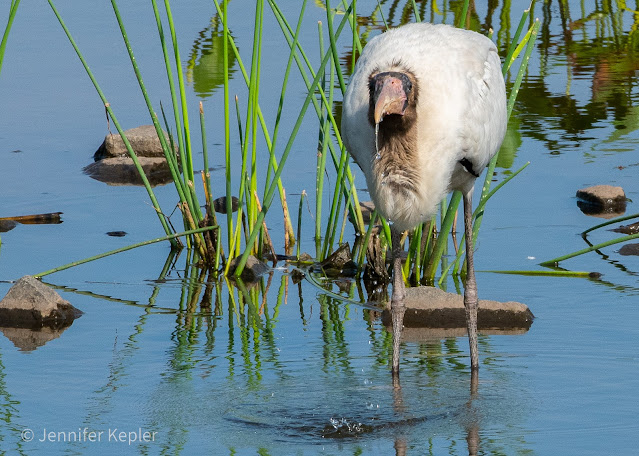 Posted by Jen Kepler at 8:06 PM No comments:

Baby Rails are Good for You

I have not been birding in maybe 2, 3 weeks. Granted it been hot, miserable, and I've missed my daughter as I've been back at work full time for a busy summer. Also my camera and lens were being weird, it all was a lot and I just needed some time to be with my family, see friends, and just relax for a bit.

But I missed the birds and while I made some treks here and there, saw my baby terns at Nickerson, saw my piping plovers at Breezy Point, I also in the free time I had needed to prioritize some care time for the pets, the baby (who now walks), and me.

I got back my lens today, and it seems to be working better- perhaps it just needed a good cleaning. I don't yet have back my preferred camera body, so I went with our original camera, which is always a good backup. I took it for a test run at Marine Park. The air was thick enough to slice but it was worth it because my bird health was restored when I saw a little black fuzz ball with oversized feet...

Hoping I'll be able to get in a little birding next weekend, and if I'm lucky...a kayak paddle?

Posted by Jen Kepler at 4:02 PM No comments: