Small Owl in the Big City


I love birding. That is zero surprise to anyone who knows me, well or as an acquaintance. There is something about birding that keeps me active and returning to the same park, beach, and even specific trees time and time again. Some would think this is a sickness, but truly it's the thrill of seeing these magnificent feathered things high in the trees, fresh in from lands so far away, here because they, every trip ,need that same tree, beach or park time and time again.
Being out among birds helps me feel connected to the natural world. It lets me escape the day-to-day. When I think I have it bad, I'm not the one who flew hundreds or thousands of miles in all kind of conditions, fleeing predators, avoiding obstacles, I marvel at those feats and admire birds greatly.
There is also this sense of discovery. Sometimes birds take a wrong turn, literally get blown off course. Sometimes a brazen individual flies a bit further than the rest. Sometimes another gets caught up in a flock and stays with them for the long haul and passes their stop. Who truly knows what, but sometimes a bird ends up in a place it usually isn't, and seeing those birds is outright THRILLING. That happened to me yesterday, but it also put me in an odd position mentally and ethically.
I always volunteer to assist with the Horseshoe crab monitoring through NYC Audubon, I look forward to it. What a special way to be involved in science and contribute to the work this amazing organization is doing. I like to always monitor at a few spots because they can differ so greatly, last night I was signed up for Big Egg Marsh. After a stop at New Park Pizza (the best Pizza, btw.) and some light birding at Jamaica Bay with my friend and colleague, we were honestly stoked to have found a secretive and skulky black-billed cuckoo and have some nice photo ops of a house wren, belting out its song. 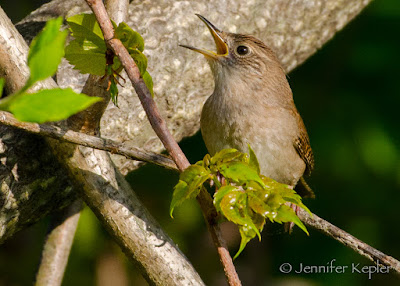 Trying to not be late to our assignment, we got down to the marsh in time. I noticed there was some construction, the parking lot was much smaller. Even when I am not birding, I keep an eye out for things. So I looked twice when I saw a round, compact, but hefty bird on long legs perched atop one of the fence posts. The shape was one I knew, from books and documentaries... 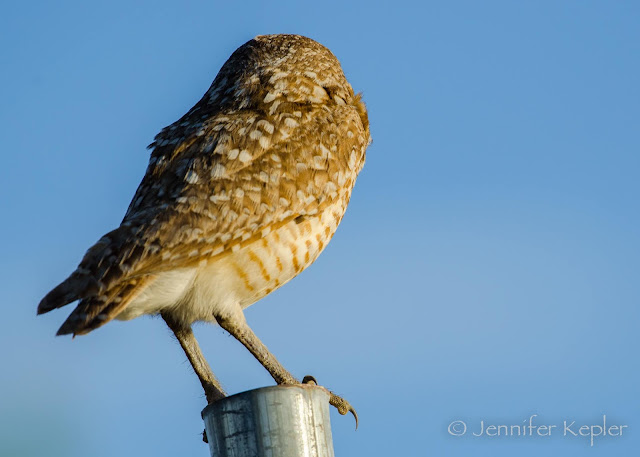 It wasn't looking at me. But, could it be?? Then, with a quick, smooth turn of its head, me in my car and it barely more than 11 feet away, it kept that cool, smug look that burrowing owls have, while I made quite possibly the dumbest face ever known to human kind. With my iPhone, I could grab a clear shot that would very much confirm this as what I knew it to be. 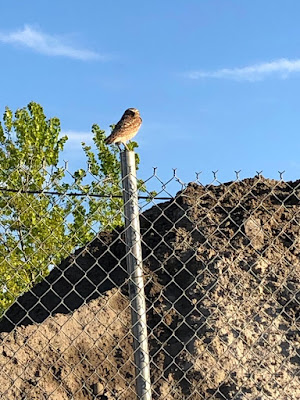 IT IS A (insert an elated word of choice -- mine are not appropriate for the internet) BURROWING (insert more elated words here) OWL! 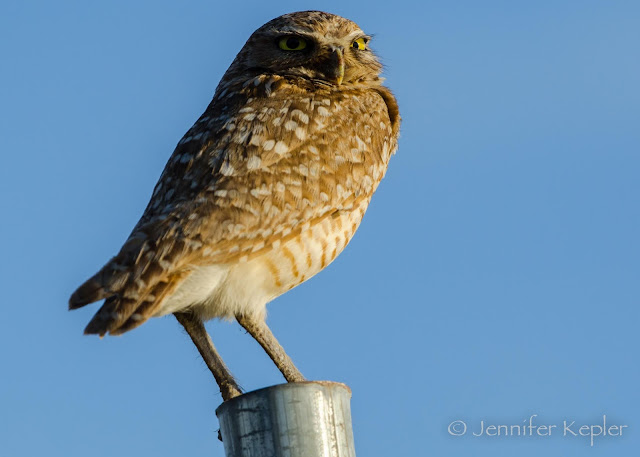 ...Just to put into context how this then goes. I know where burrowing owls live, I was planning to see some when I visit COLORADO this summer. I also know they live in some areas of Florida. They are reliant on other burrowing creatures, for which they are tenants, especially for nesting. Usually those burrow hosts are Gopher tortoises, Prairie Dogs, or other Ground Squirrels. So, doing the math in my head, this bird did not compute. 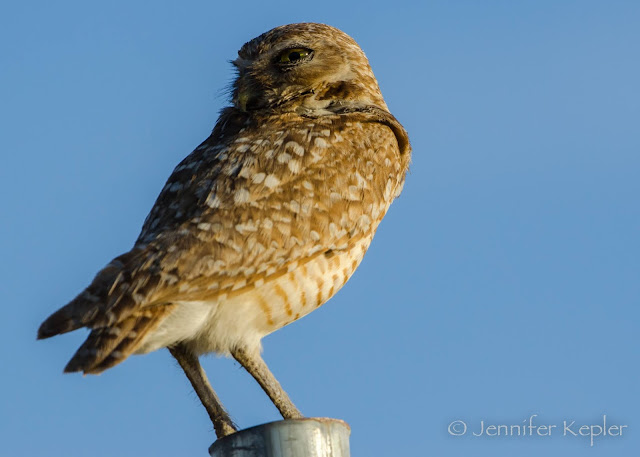 So, rewind a few years, a bird that reignited my love of looking for birds was a swallow-tailed kite, I spotted in Prospect Park. That very similar math flowed through my head, I knew that had to be something special. But I wasn't aware of the birding community and just how immense it was. I know folks were upset that I didn't share it to a list-serv (I didn't know there was one!) or eBird (what's an eBird?!). I didn't know this procedure, so I did not truly spread the word.

To say the least, I learned a lot. And since then, I only learned much more. So knowing how special this owl was I knew I had to share. And I did. But then another thought crept into my head as the excitement began to wear. That thing about birding ethics, and not sharing the locations of owls, and treating them as a sensitive species. 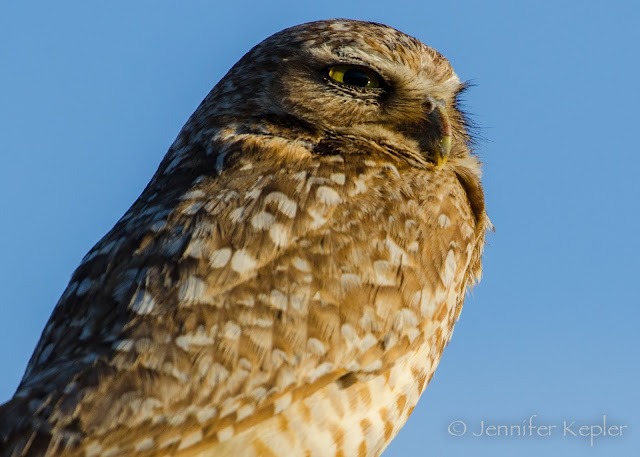 Of course, as I remembered that, I already went insane posting a picture on twitter. Birders are like turkey vultures, they can find what they need under that dense canopy of leaves and they are ON IT. And already folks had found out, even with deleting what I had put into the world, it was too late. Now I'm bugging out in the nervous wreck of a way.
I felt pretty crappy. I had done wrong. I had done something that I advise others not to do. I thought I would lose respect in this (sometimes) very close-knit world, I was ready and bracing for a stoning, and especially as a female birder, I felt pretty vulnerable.
Talk about feeling ALL the feelings, from excitement to absolute crap.

In the end, I breathed. I spoke to some people, male birders, female birders - they reassured me that if they were in my position, they probably would have done all the same things. And that in the end, people will, no doubt go and try to find this bird, now that the cat was out of the bag. Also, being such a rarity in our area, people would want to know.
I was only reassured and supported by people in the birding community and that was really nice. It was very much heartening to experience that and for those who may have chatted with me or communicated with me, thank you. It's nice to know there are some really good, helpful folks out there. 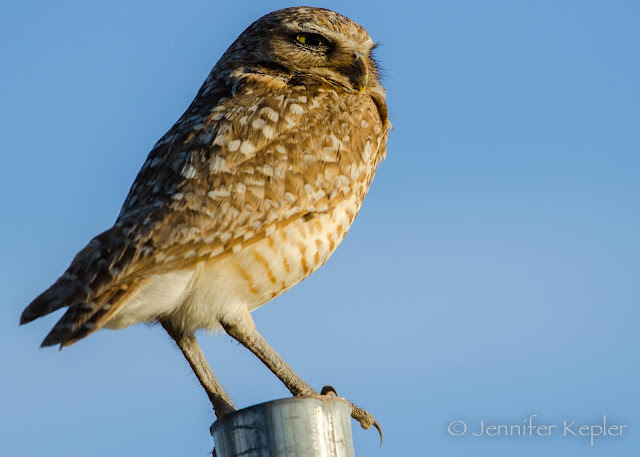 I woke up today to only learn the bird was not re-found - but oddly, a sage thrasher in nearby Jamaica Bay Wildlife Refuge. The owl perhaps realized where the heck it was and turned back to from where it came, truly, who knows. Knowing that it has moved on, I feel alright sharing some photos I captured. I'm stoked to have discovered such a bird, here, within New York City.
And when it comes down to it, this is part of the joy in birding and what keeps me going out there. Finding something special, being so lucky to just be in the right place at the right time at the same time as this tiny little owl. These moments are beyond special, I am so excited I got to share it with my friend who happened to be with me and a few others who were tagging crabs. A few folks did get out to re-find it and I'm glad they got to see it too.
For me, this was another moment to learn and be thoughtful about this little creature whose presence brought me a ridiculous amount of thrill and joy and the appropriate means to getting the word out, without causing this animal undue stress. 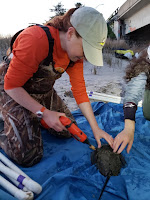 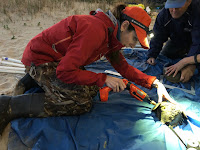 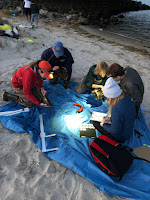 And bonus, it was a very fruitful night for horseshoe crabs. We tagged 50 individuals and even got a few in our quadrat samples that we took! 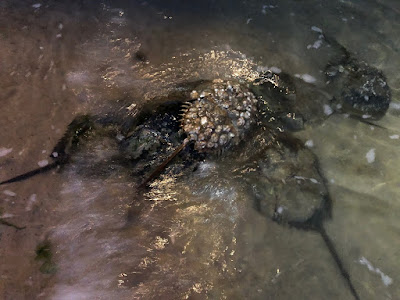