It's that time of year, female turtles are looking to lay their eggs. In order to accomplish such a feat, females leave their aquatic realm and venture into what is sometimes, for them, less familiar territory on land. In the city and developed areas this can be a problem, humans have built roads and turtles do not get along well with cars. It is a huge problem for turtles, especially at this time of year, many perish when crossing roads and trekking to find a suitable nesting site.
In my 5+ years of commuting via bike through Prospect Park, I have often seen (and have even been called to help with) mother turtles either going to or coming from laying eggs. I specifically left for work early today so I could hopefully photograph the turtles of Prospect Park, Brooklyn. Prospect Park has in all of its waters, the popular pet and invasive, red eared sliders, which are highly visible and also nesting. I was hoping to see a common snapping turtle, and I did! I escorted her along and had some wonderful chances to teach people about her and her kind while doing so - enjoy her adventure below: 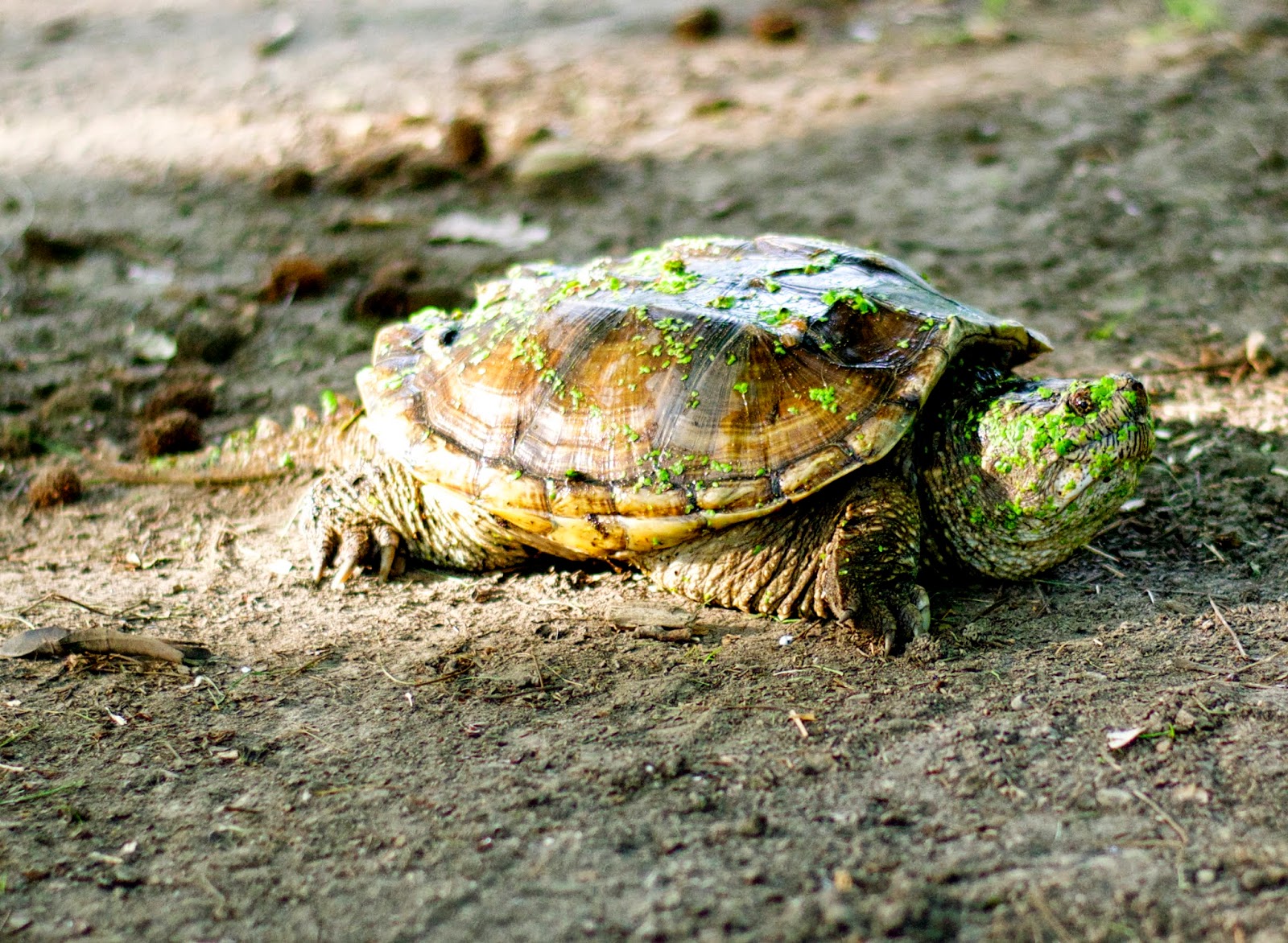 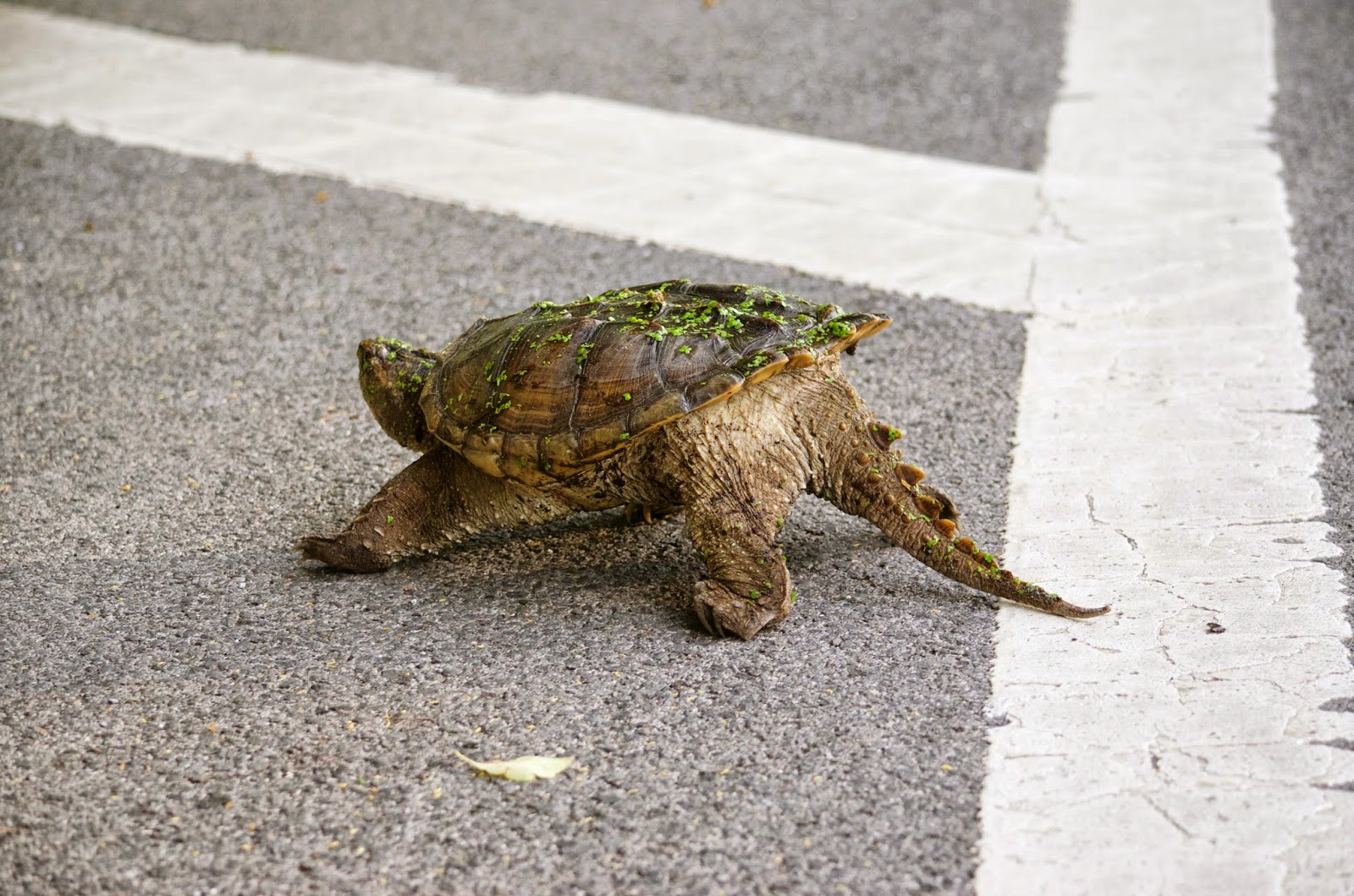 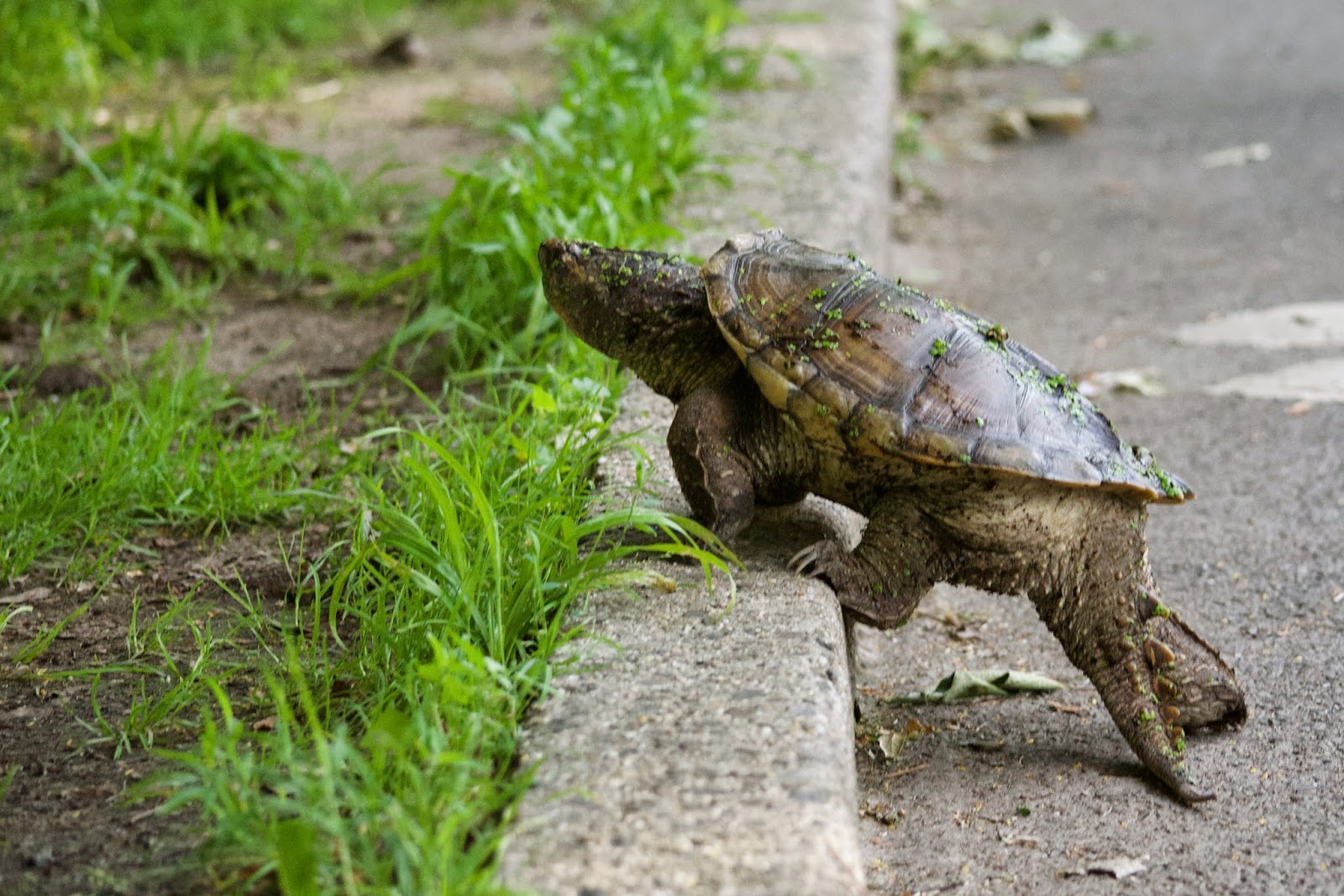 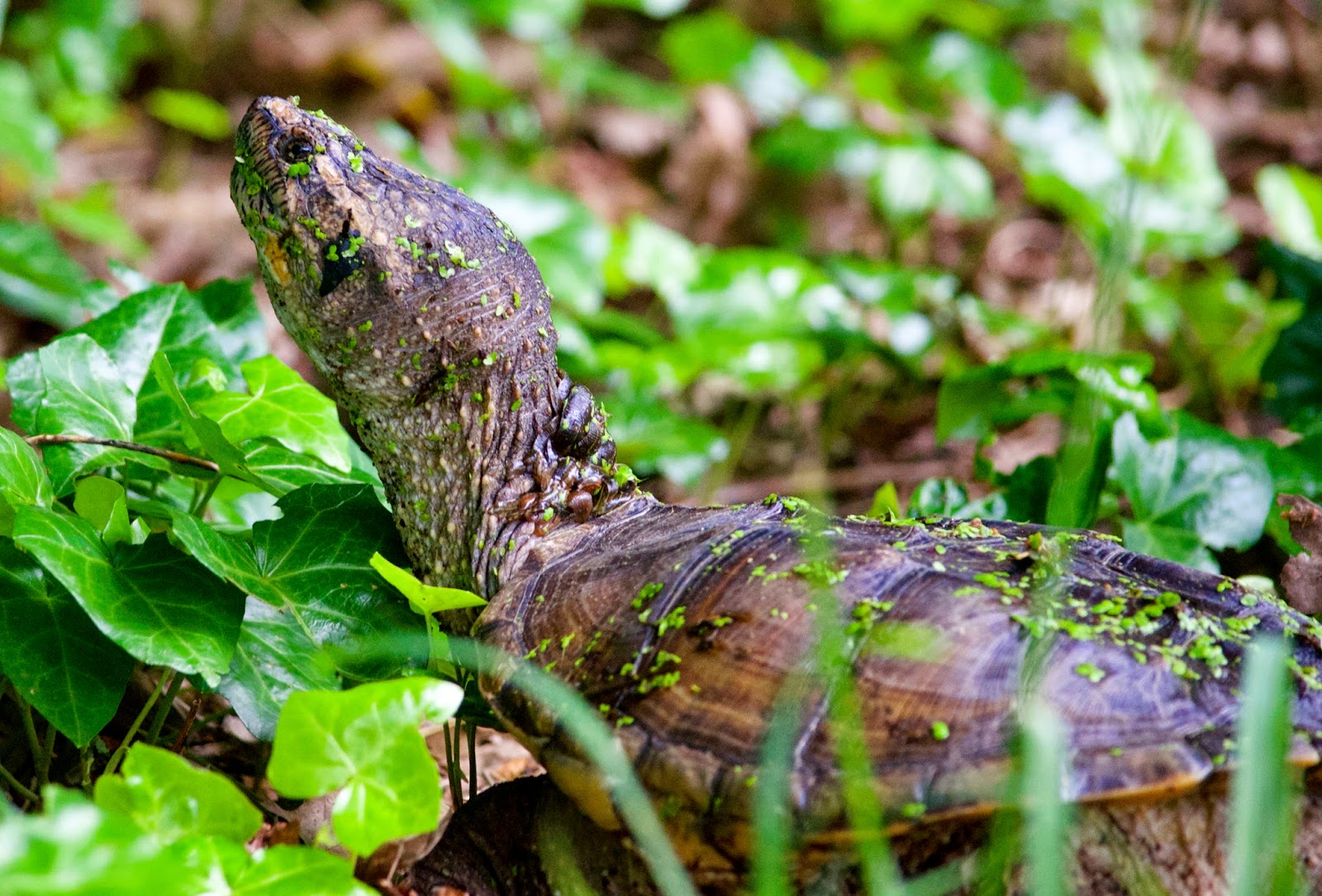 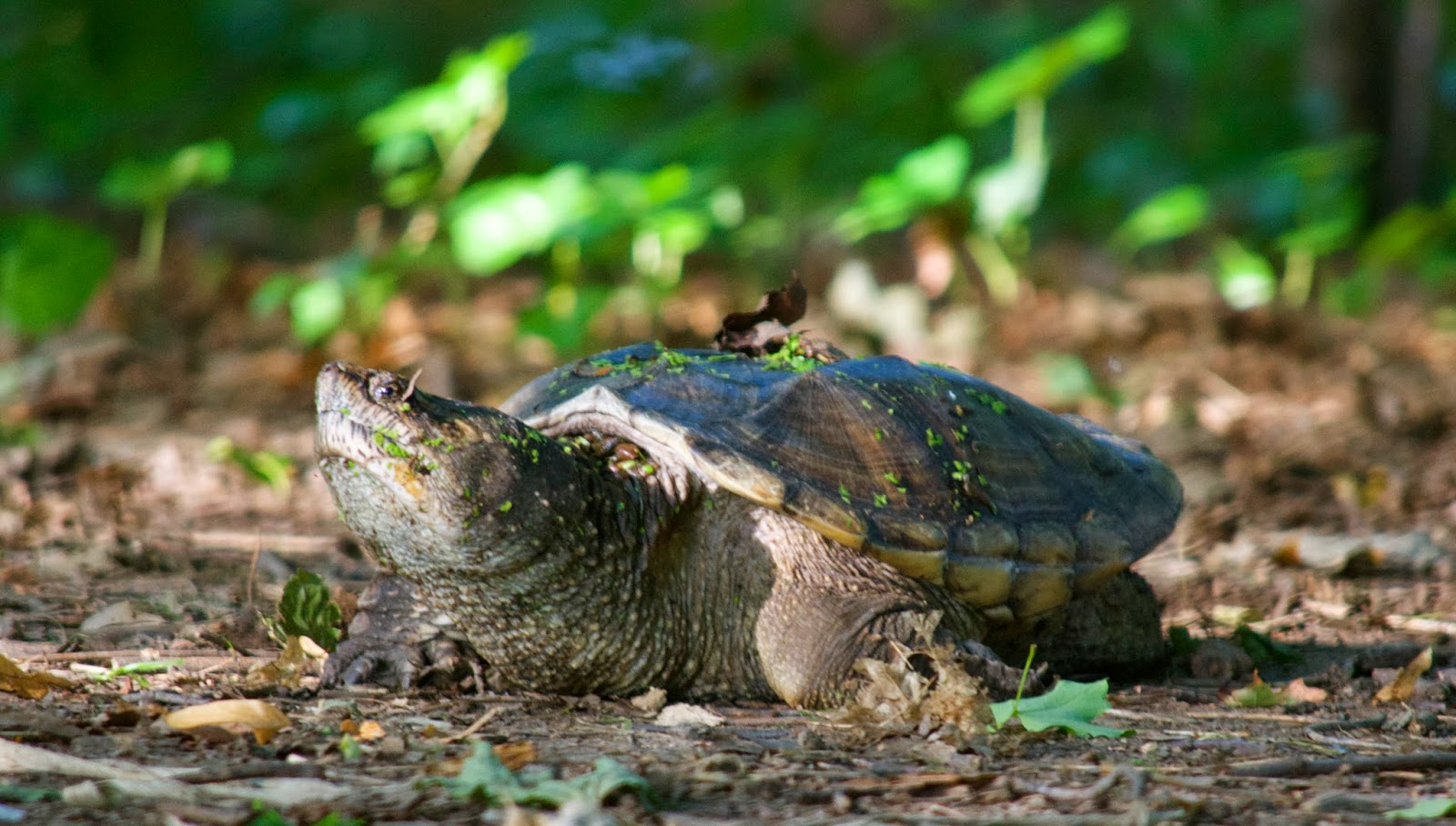 I want to also share that this turtle is a wild animal. Except for her escort across the street I did mind my distance, I used a 300mm lens, so that I could be afar and not disturb her but still was able to watch and photograph her. In my observations I noticed a few things that worried me. People did offer to pick her up, to which I said there was no need; I understand the need to want to help, but we should not ever interfere with nature unless there is immediate danger towards the animal. Not many know how to properly handle these turtles and many times injure themselves and/or the turtles. Many dogs were also off-leash, Prospect Park has off-leash dog hours but in specific areas, not where this turtle was. A dog who may wonder could injure the turtle or get injured itself, not to mention this is all right next to a major road, and an exit to that road and the dangers there for a dog are immense.
I did have to leave the turtle after observing it for an hour - I had to be at work! To ensure safety of the turtle and park goers, I made sure to contact people who could help. A huge thank you to my friend Mary Beth and her friend Marty, who went to look for and provide safety to this animal.
If you ever are on the road and see a turtle crossing, help when it is safe, because you are not going to be helpful if you too get hurt, don't ever put yourself in danger- call the professionals! Always help the turtle in the direction it is going, they are tenacious and on a mission to go in the direction they are headed, to bring them backwards will mean they will turn around to head back in the way they were originally headed. If you don't know what to do, contact your local animal rescue or wildlife rehabilitators, they will know what to do or provide you with guidance.
If you would like to observe nesting turtles, they are most active in the early morning, but remember to mind your distance so the turtles can do what comes naturally! Happy Herping!
Posted by Jen Kepler at 5:14 PM