The Park Goes to The Birds 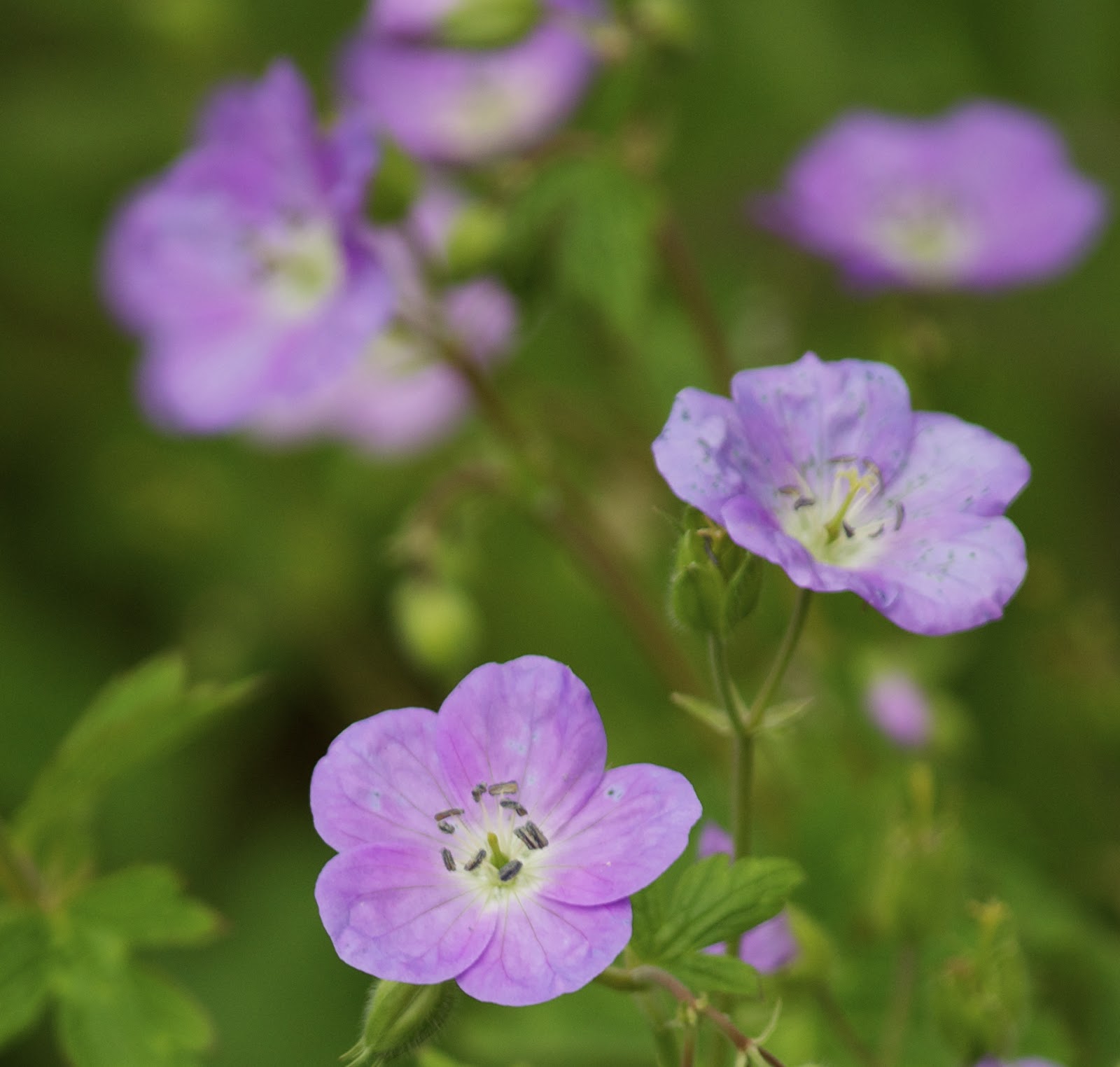 I do not in anyway consider myself an expert birder, I know some calls and can tell you what bird is making it, I can identify some birds based on shape and flight pattern, but compared to some people out there, I feel like a novice. Sunday night I turned on HBO GO and saw that the move, "The Big Year" was on, so I figured, why not. It was very cute and I loved all the bird nerd references and appreciated the little things very much. It showed that competitive nature that you sometimes find amongst the most serious birders and also the friendships it creates. It made me want to go out and look at birds, so that is what I planned to do with my morning the next day, since I had the day off.
I looked at some birding blogs and noticed that warblers are very much abundant, so I opted to go to Prospect Park and see what was up. I locked my bike up at the Audubon Center and began walking along the boat pond to the lullwater and beyond, sticking to the shores, where the insects were buzzing and the birds were feeding. I noticed the fish in the pond were quite restless, I saw numerous leaps out of the water, possibly in attempts to avoid being eaten or to eat insects. The first bird, beyond the usual, that I saw was a warbler of sorts. I was hoping that it was the prothonary warbler that was being talked about on the birding blogs, but this is where my novice-ness shows, he was quick, I couldn't get a good view through my binocs nor could I get a blurry photo. I just saw he was yellow and had dark/grey wings- which in the world of warblers could be, like, any one of thirty (I'm exaggerating, but it feels that way). I watched and hoped to sight the bird again, I stood around for 20 minutes before deciding he must have moved on. Drat.
I moved on to another area, where the pond becomes what is known as the lullwater. Here I ran into some birders- actually, I ran into A LOT of birders. Going off on a tangent here: I have never seen so many people out in Prospect Park with binoculars looking up into trees. It was kind of awesome to see so many people out in the park looking for birds. It's like they all came out of the woodwork, I didn't know so many would be out on a Monday morning looking up to the sky trying to ID birds! Anyway, I ran into two gentlemen who asked me if I saw anything good, and I mentioned my unknown warbler sighting, and told them how I do not have huge confidence, but that I was hoping it was prothonary, then they whipped out their birding apps on their smart phones and showed me about 5 other warblers that matched my description and I couldn't really confirm much of anything. They were nice guys and told me about the vocalizing orchard orioles. Like I said, birding is the only time I really ever talk to strange men in the park.
After that I ended up seeing a male redstart dart around a tree, he was so fast that even the sports-mode on the camera couldn't focus and catch him. I went manual and I think I got some okay shots, considering the circumstances. Oh, and now that it is spring, looking for birds got 10x's harder now that leaves obstruct your view.
I noticed that a lot of birds were up high foraging on buds and flowers up in the trees, so I decided to get on their level by going on the bridge that crosses the lullwater. I got up there and was able to sight a yellow-rumped warbler and a black and white warbler. I also met another bird guy up there, who was with his baby in a stroller. I pointed out the Northern (Baltimore) Orioles to him, telling him that they are my favorite birds to see. He then pointed out to me the song of the Northern Parula (you guessed it, another warbler). At first, I was like what the heck is this guy talking about, and then I heard it! I described this moment to my husband, about how I thought this guy was crazy, and how I didn't hear anything and then finally pinpointing the song out of many others. My husband then told me how that is how he always feels when I'm with him and ask him "did you hear that?!" Anyway, it has this ascending call, and hopefully it's another one to add to my bird brain.
I was trying to also look for frogs, but I, in the end got caught up in birds. The birds for the day were as follows: barn swallows, common grackles, red-wing blackbirds, orchard oriole (heard), Northern oriole, mallard, canada goose, mute swan, black-crowned night heron, black and white warbler, yellow-rumped warbler, Northern parula (heard), mystery warbler, white throated sparrow, house sparrow, European starling, mourning dove, American redstart, double crested cormorant, downy woodpecker, chimney swifts, red-tail hawk, blue jays, and Northern cardinal - Phew! 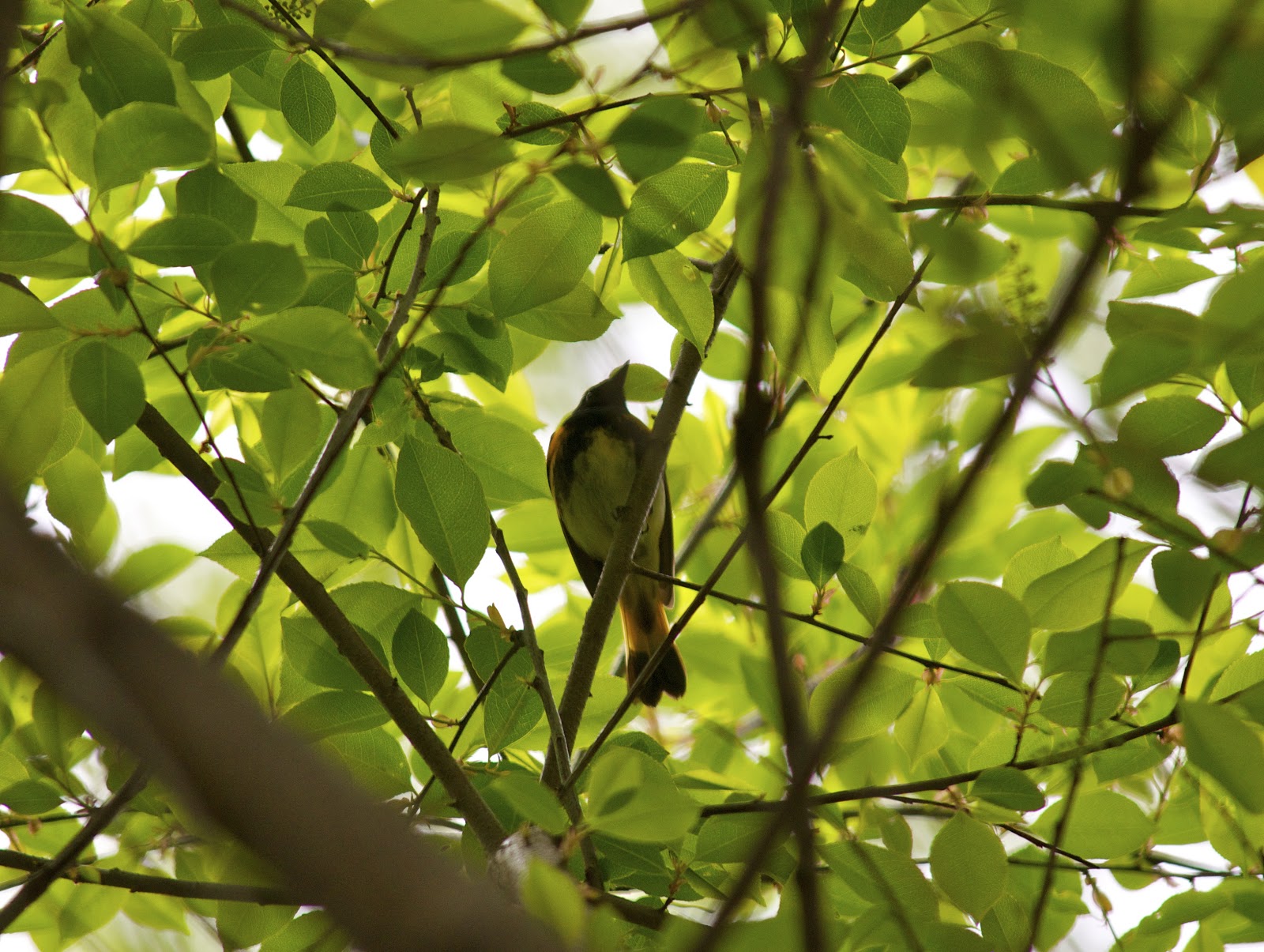 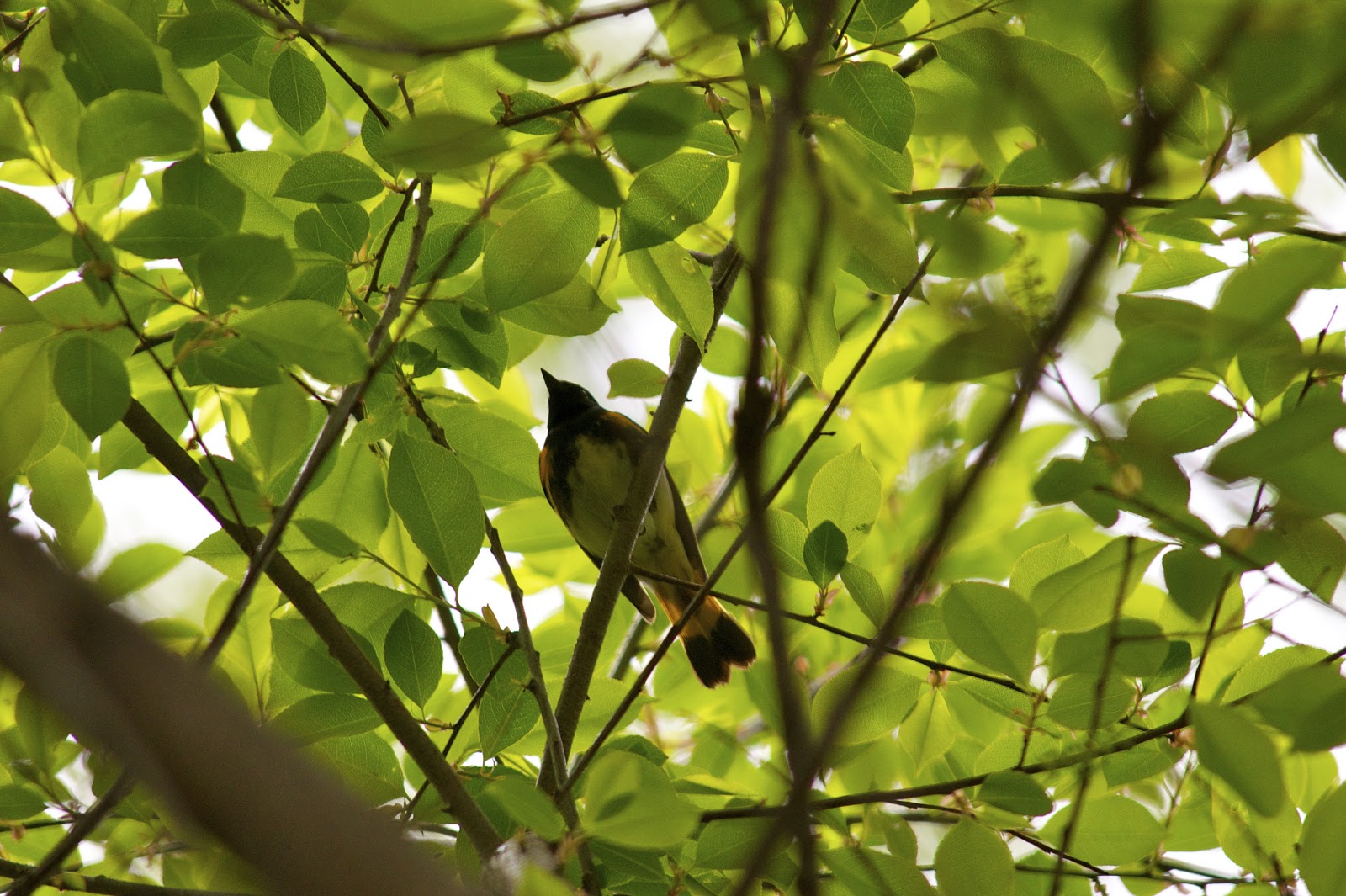